How time flies as this week’s update marks the 2 month anniversary since I started working on Winamp things again with the creation of this site. The main progress made this week wasn’t at all what I’d planned to do at the end of last week in the creation of a new plug-in (in_url.dll) which came from a conversation after putting up last weeks post.

This new plug-in (in_url.dll) at the moment allows Winamp to play youtube videos with normal youtube urls (though only MP4 versions, WEBM isn’t support) as well as soundcloud urls. I had also gotten tunein support working (which in a lot of cases ends up being a SHOUTcast server) but something was changed at the weekend which broke it (having only implemented support for it on Friday so will have to get that fixed.

Behind the scenes this new plug-in works out what the stream url that Winamp needs to play is whilst allowing the native youtube or soundcloud stream url to be entered in the playlist without the need to extract things before putting them into Winamp. So it’s more a matter of convenience that this new plug-in will provide over what can already be done with Winamp and external sites for converting the stream urls.

Related to working on this new plug-in, about half of the shortened week was spent trying to get the playlists urls working with Winamp’s proper playlist api. Sadly Winamp will attempt to download anything that is an url but is reported as being a playlist. So i’ve been looking into a few possible ways to work around that which I hope to have an update on in the coming week.

The other issue I was hitting was a crash when attempting to load the artwork page on the Alt+3 / File Information dialog. I’ve worked around this issue in my loader program and the crash fix might be handy for other plug-ins which potentially trigger the issue I was seeing (though none of the native plug-ins seemed to do it).

There was also a fair bit of time was spent tracking down a weird crash when trying to download podcasts with my replacement database engine which I’ve now fixed so all of the database related aspects appear to be stable now when used with my replacement (until I find the next crash issue, heh). Otherwise I’ve been integrating my paths.ini file editor into my loader program so it’s a bit simpler for me with testing some aspects by having that natively built-in as a command-line option via winamp.exe /PATHSEDIT. Most will never need or want to use this but it’s helped me since I’ve added it in.

Doing this has also made me wonder if at a later time I look at replacing the Winamp Agent (winampa.exe) with a mode in my loader program (e.g. run as winamp.exe /AGENT). Since the agent basically just sits there and shows an icon in the notification area until it’s clicked on for the menu or opening Winamp proper. As the loader does a similar thing in that it loads Winamp (albeit immediately once it’s done it’s hooking setup) and is just not having the icon / menu interaction, which it could be made to do.

Anyway it’s just a thought on something to do plus it would make it possible to apply some of the bookmark menu sorting / categorising options that my existing ML Bookmark Categoriser (ml_bkmk.dll) plug-in offers when Winamp is fully running to the menus that the agent provides as per the screenshots below. 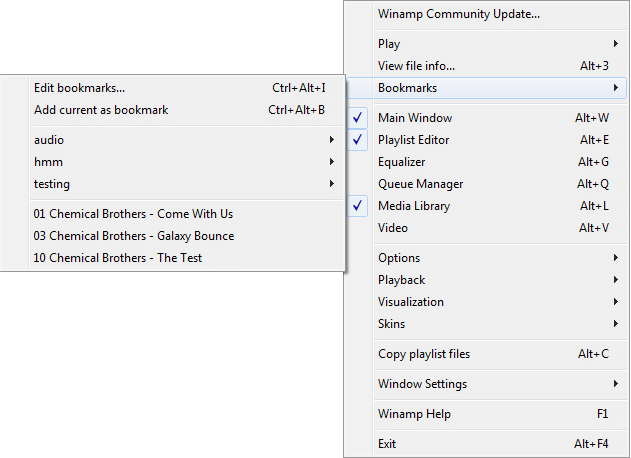 Finally there’s been some work going on with making a logo for the Winamp Community Update Pack which i’ve been calling wacup for short. I’m pronouncing it as wakeup in English and yes I know it’s a bit of bastardisation of the language but it makes me smile :o) ). This is being very kindly done by Victhor (please check out his other work on Winamp skins) and the new logo / icons will be appearing on the site in the next few days once it’s all finished up.

Fill out the form below to add your own comments